Posted by Thekla Salmon on Oct 4, 2011 in Chicken, Mains, My thoughts, Recipes | 0 comments

I am all for the simple things in life. Sometimes the simplest things can truly be the most rewarding. The lunch I made yesterday was just like that. I marinated some chicken pieces, baked them for half an hour, tossed together a salad and there was lunch. Succulent and tasty. Naturally, one should have a few good tricks up one’s sleeve, but the bottom line is keep it simple.

My chicken marinade was based on one I learned from a Muslim client of mine. The base of the marinade is yoghurt, to that you add garlic, ginger and chilli and then the seasoning of your choice. I added tikka masala; marinated the chicken pieces for a few hours and then baked them in a preheated oven at 200C˚ for 30 minutes (if the chicken isn’t cooked through drop the heat to 180C˚ and bake for a further 10 – 20 minutes – if the chicken is browning too much cover it with foil).

The salad is a recipe from my German grandmother – butter lettuce tossed in a garlicy sour cream dressing and topped with chopped chives. It really is heavenly. You start by making the dressing in the bowl you are going to toss the leaves in. Start with a few spoons of sour cream (about 1 Tbsp per person eating) then add some lemon juice, pressed garlic, salt and black pepper (a pinch of sugar if desired). Mix it up and toss the leaves through it. Top this with chopped chives. So simple but way more delicious than you can imagine. You can substitute the sour cream with yoghurt, but it really just isn’t the same.

Adding gravy kind of diverged from the simplicity of the meal and really wasn’t necessary. So I’m going to leave it at that.

If anyone is devastated that there isn’t an exact recipe for the above, mail me and I’ll write one for you. 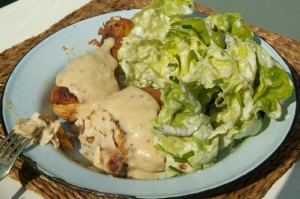