A few weeks ago while I was looking after my sisters kids, we had a super cold and wet day. So I suggested that we do some baking. Oddly enough the boys were more keen on baking than the girls. The youngest chose a gingerbread men recipe (or ginger bread ‘people’, as I was corrected) and the older boy wanted to bake his favorite chocolate brownie recipe. We have baked this recipe together twice before and this time he wanted to adapt it using milk chocolate as he is not crazy about dark chocolate.

The original recipe is by Jamie Oliver and, in my opinion, cannot be improved upon. It is simply to die for. The only amendments to the recipe below, is Max’s adaption using milk chocolate, I upped the nut quantity (I love nuts) and I have increased the baking time, is it really just too runny with only 25 minutes baking time.

I want to add that the below picture is of the brownies, Max (aged 10), made all on his own. I did not help him at all!

I would love to give you the gingerbread men recipe, but it had to improvised a bit as the kids added about 4 times too much butter to the recipe by accident and I had to add a bit here and a lot there to get the consistency right again. They ended up tasting pretty nice too, but I have no idea how I got there. 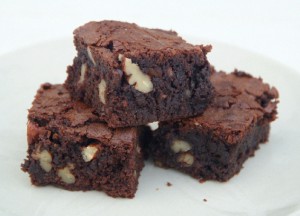 200g dark or milk chocolate (your preference), broken up

Preheat your oven to 180°C. Line a 25cm square baking tin with greaseproof paper. In a large bowl over some simmering water, melt the butter and the chocolate and mix until smooth. Add the nuts and stir to combine. In a separate bowl, sift together the cocoa powder, flour, baking powder and sugar; then add this to the chocolate and nut mixture. Fold this together well with a wooden spoon. Beat the eggs and mix into the main mixture until you have a silky consistency.

Pour your brownie mix into the baking tray, and place in the oven for around 35 – 40 minutes. You don’t want to overcook them so, unlike cakes, you don’t want a skewer to come out all clean. The brownies should be slightly springy on the outside but still a little bit gooey in the middle. Allow to cool in the tray, then carefully transfer to a large chopping board and cut into chunky squares.

PS – I made another batch of these for my cousin and her five year old son, told me that he had never eaten anything as good in his life before!