A few days ago, while my nephew was with me, I received in the mail the first edition of a new magazine called ‘Baked and Delicious’ and with the magazine came a gift of six brightly coloured silicone cup cake moulds. Now if this was not a sign from God that cup cakes needed to be baked, then I don’t know what is… We followed the recipe for vanilla cup cakes from the magazine but decided to top the cup cakes with caramel fudge sauce instead of vanilla butter icing.

Today I made another batch because the last batch got guzzled down so quickly by Luke and Adam, I didn’t even get one. For today’s batch I decided to experiment with a salted caramel topping as Annika had brought salted caramel chocolate truffles for us to eat over the weekend and this fabulous experience has stayed with me. I just happened to have half a packet of hazelnuts in the cupboard and I think they add a nice taste, texture and appearance to the cup cakes.

The silicone cup cake shapes are such a win. I have seen them in stores before and had not seen the point in them, but these ones are such bright fun colours and are totally non stick. So often cup cake papers end up looking all oily and tired after baking but these silicone guys look fresh, funky and fabulous! 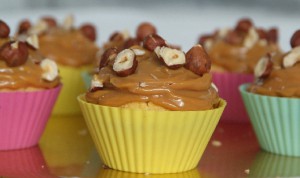 ½ a cup of castor sugar

Preheat the oven to 180C˚ and place the rack in the middle of the oven.

With a cake mixer, blend together the butter and castor sugar until light and creamy. Add to this the eggs, vanilla and milk and blend to combine. Add the baking powder and cake flour and blend until smooth.

If you are using cup cake papers, place the papers into the holes of a muffin tin. If using silicone cup cake moulds place them onto a baking tray or into a muffin tin.

Spoon the mixture into the cup cake moulds until ¾ full. Flatten the mixture and push it up the sides of the moulds as much as you can with the back of the spoon.

Bake for 15 – 20 minutes until golden and springy.

Allow to cool before icing.

For the salted caramel topping you simply combine about ¼ of a tsp of salt with a 360g tin of caramel. You don’t want the caramel to be salty but just to have this slight salty tanginess. Using the back of a knife, spread a thick layer of caramel onto each of the cup cakes. Roughly chop up hazelnuts and decorate the cup cakes with these. 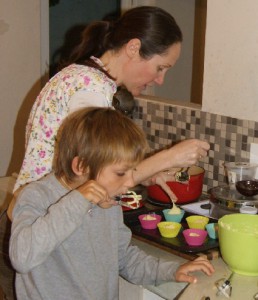