I am going back to the island tomorrow. As much as I love it there and am happy to go back, it means I leave the wifi behind… so no more blogging. I will however keep taking photos and will roll out the stories as soon as I am able.

It is also late now and I have had a long two days behind me so I am going to keep my writing short and sweet. If anyone is so overwhelmed with the need to know a detailed recipe, send me a mail and I’ll work on it for you.

A week ago we had some guests and the weather was pretty chilly so we decided to make a more warming wintery meal. Norway is famous for its lamb so we decided to roast a leg of lamb. I marinated it with warming rich flavours – studded it with garlic, coated it with cumin and garlic yogurt and sprinkled dried herbs and tandoori spices all over it. I created a sealed foil parcel around it in which I had put chopped onions, tomatoes and lemon wedges.  I roasted it in the oven at 180 C for an hour and dropped it to 140 C for a further one and a half hours. I opened the sealed foil parcel and allowed the lamb to rest for about 10 minutes before slicing it up, using the cooking juices to make a very basic gravy.

It was so tender, moist and flavoursome. The accompanying dishes were baked aubergines, saffron rice pilaf and cucumber raita. My guests were beside themselves and ate until they all had to go for a long walk before dessert, to ease their tummies. 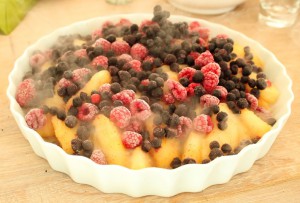 For dessert I made an apple and berry crumble served with vanilla ice cream. I substituted xylitol for the sugar in the recipe which I have been doing a lot lately. It tasted just the same! I just loved the above picture as I had poached the apples so they were warm and topped that with the frozen berries which then started smoking like dry ice. I thought it look pretty cool. 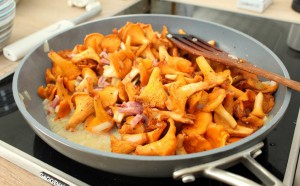 Our one guest brought with her a basket full of chanterelle mushrooms which she had picked in the forest by their house in Sweden. I was so excited, as I just love chanterelles and can only buy them dried in South Africa.

We had them for breakfast the next morning. I fried up some lardons and finely chopped onion in a little butter, then added the mushrooms and fried them slowly until all the moisture had cooked away. I seasoned this with a little salt, pepper and dried thyme and served it with soft scrambled eggs and a mountain of chopped fresh herbs. It was out of this world.