Posted by Thekla Salmon on May 24, 2011 in Baking, Desserts, Featured, Recipes, Vegetarian | 0 comments

I have a few excuses for today’s immoderacies. I have a sick fiancé at home today and while checking twitter this morning, Eat Out asked what our favourite pancake toppings were. I immediately posted flambéed banana, with honey, cinnamon and pecan nuts. I then read a few other tweets and decided that pancakes would most certainly put a sparkle in ailing Adam’s eye.

While I was shopping my plans of flambéing went South as I walked past the shelf holing the Nussfit which is my preferred chocolate hazelnut spread (better than Nutella in my opnion). I also happily changed my tune to hazelnuts when there weren’t any pecans available.

The end result was barely what I had started out shopping for but never the less fabulous. I flavoured my pancake batter with cinnamon and vanilla, spread the pancakes with a generous amount of Nussfit, sliced banana and chopped hazelnuts. This was accompanied by steaming hot cups of flowery black Darjeeling tea. My boy is now tucked up in bed with the kittens again and a small smile on his sleeping face.

PS – I also bought a new pan. I have a fetish with flipping pan cakes (almost as much as the pancakes themselves) and my non stick pan is a bit scratched to say the least. So, I bought one of these ceramic coated non stick pans with no PTFE’s and PFOA’s (it sounded like the right thing to do???). It worked like a charm for my pancakes, will now see if the 5 times harder promise also holds true? 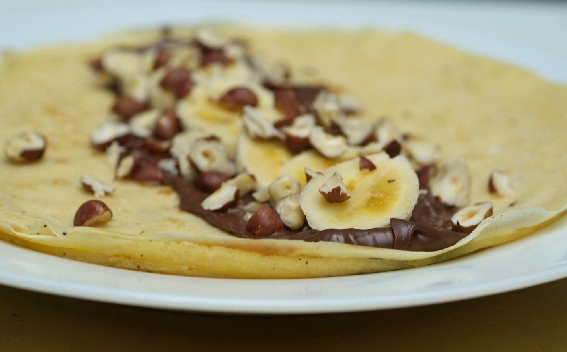 Basic pancake recipe with my twists

In a medium sized mixing bowl, whisk together the milk, water, eggs, salt, sugar, cinnamon and vanilla. Sift the flour into the mixture a quarter of a cup at a time and whisk lightly. Add the melted butter at the end. Try not to over whisk once the flour is added as you don’t want the gluten to build up too much as this will make the pancakes rubbery. You can rest this in the fridge until ready for use.

Heat a non stick frying pan (24cm is a good size) to medium high heat. You can oil the pan a little to make extra sure the pancakes don’t stick but pour off any extra oil, you don’t want pools of oil anywhere. Using a soup ladle or tea cup, pour about ½ a cup of the batter into the hot pan and tilt the pan around in a fluid circular motion to spread the mixture. Pour any extra mixture back into the mixing bowl. You can trim the pancake where you poured off the mixture using the edge of a spatula to keep the round shape. This just ensures you have nice thin pancakes while still getting the batter to cover the pan evenly.

Once the pancake is cooked at the bottom, it should come loose quite easily by shaking the pan or gently lifting it with a spatula – about a minute or two. You can flip the pancake using a spatula but I love flipping them in the air. It really is fun. I have pasted a short youtube clip giving you a good idea of how to do it. Practice with a piece of bread first to get the method right if you are nervous.

Pancake toppings are a personal thing. I love the old faithful cinnamon sugar (except I use castor sugar) with lemon juice. The flambéed banana with cinnamon, honey and pecan nuts is a dream (also good on ice cream). But if you need a good excuse to buy a jar of Nussfit or Nutella, try the ones I made today.

I now happily have a three quarters of jar left in the cupboard. Nice!