Today I have a guest blog written by Annika Ziehen aka anysroad, who I have mentioned and referred to in many of my blogs. She is my cousin, close friend, fellow foodie and blogger. Her blog is however not a food blog even though it does come up quite a lot. She is a fabulous cook and despite being ‘new’ to Cape Town is constantly introducing me to the latest food hot spots. The dish she is writing about is one which she apparently eats almost weekly and has chosen to write about because she knows that I like my recipes to be quick and easy and with locally accessible ingredients.

She cooked it for us yesterday and it was delicious. Simple and so tasty. I loved the fresh rocket, it really set it apart for me. Okay, enough from me… over to Annika: 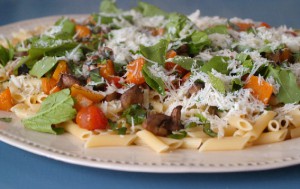 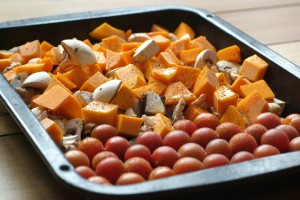 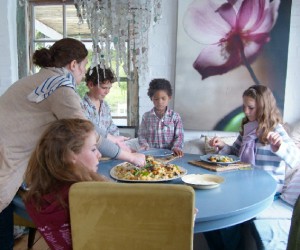 So now it has finally happened: I am asked to do my very first guest post. I do know that it is based utterly and completely on nepotism, but I can’t help feeling excited and quite honoured either way. Due to the nature of this blog I will have to show my domestic goddess side i.e. cook something. What people don’t know is that I can cook other things than pasta, but since I am known as the pasta auntie and am a self dubbed pastaholic, I will stick true to form and write about pasta. Thekla promised to take care of the recipe since I am one of these horrible people that just throw stuff together till it tastes good (or not … the system isn’t foolproof) and never measure a thing. I’m not judging though, people cook differently and if you need to have a recipe that’s fine. Just don’t date me. That may lead to utter disaster as a previous relationship has shown. It often got heated in the kitchen and not in a good, Nine ½ Weeks kind of way.

The dish (I won’t call it a recipe as it’s not) is something that evolved from a pasta meal a friend once made for a dinner party and a dish they served on a wine farm we went to for my birthday a few years ago. Both evoke my love for grilled cherry tomatoes and I finally understood why a tomato loves the sugar. You could call it “Roast veggie pasta with fresh rocket and a bucket of parmesan cheese.” It doesn’t have the usual sauce superstars i.e. meat or alcohol, in fact it doesn’t even have a real sauce, but I promise it rocks.

First things first – pour yourself a nice big glass of wine. Then boil pasta. Easy enough. The water must cook first before you add salt. This is the order and there is some scientific explanation to it, which my Dad once gave me, but I forgot. Just do it. Any short pasta i.e. Penne, Fusilli, Shells is good. Barilla actually makes nice whole wheat pasta if you wanted to go healthier. I like it because it actually tastes quite non-whole-wheat-y.

Chop mushrooms into quarters and butternut in small-ish pieces and put on a baking tray with cherry tomatoes. Douse them all in lots of olive oil, salt, pepper, and roll around. The tomatoes also get some sugar on top. Into a pre heated oven at about 200 degree for 15 minutes or until the butternut has cooked through. For the last few minutes turn on the grill. Mushrooms should be brown, butternut soft and tomatoes mushy and juicy. Toss together with pasta and top with some rocket, basil and of course lots of parmesan cheese. For this dish I think it’s important to get a good one and grate it into big flakes. It just adds another texture to the dish.