A very good friend of mine just had her first baby and I, as one does, decided to make her a lasagna so at least one or two meals could be taken care of while she and her new angel acclimatise to each other. Lasagna is not the most inspiring dish to make so I decided to improvise with the meat sauce a little and oh my word, what a winner it was! I must have spooned up at least a cup of it just in the ‘tasting’ process.

The second best part about it was that it took me 20 minutes to make it! There are three main differences to how I made it. I used a blend of beef and pork sausage meat for the base. I used sage as the herb and sweetened it with a plum and onion preserve from Chaloner. The pork, sage and plum combo just lifted the sauce to new level. If you couldn’t find the Chaloner sauce, try find a plum sauce, hoisin sauce or good chutney to substitute it with.

Luckily I had some left over meat and cheese sauce, so I whipped up myself a bowl of pasta for a late lunch. So good! This sauce would also be great as a bolognaise style sauce, cottage pie or traditional pastry pie filling.

I will add the recipe for the white sauce and method for the lasagne below – use which ever part best suits your needs best! 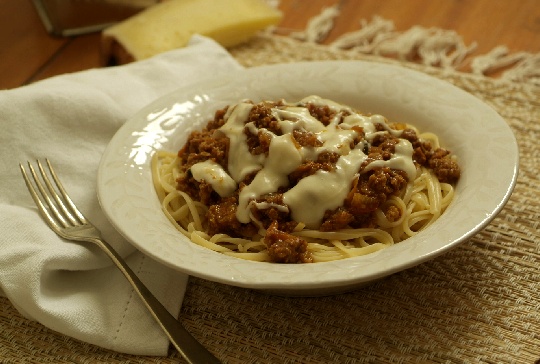 2 cloves of garlic, peeled and chopped

300g of Wiltshire pork sausage meat squeezed from their casings

400g can of whole peeled tomatoes

1 cup of beef stock (reduce this to half if you want a drier sauce, I like my sauce quite wet)

Heat the oil in a medium pot on medium to high heat and add the onion, garlic and spices. Allow them to fry for a few minutes. Add the meat and brown that for about five minutes or so. Add the contents of the tomato can (juice and tomatoes), the carrot, the stock, the plum sauce, and salt. Break up the tomatoes with a spoon or spatula and allow this all to simmer until the meat has cooked through and the flavours have combined.

2 tsp of a smooth mustard

½ – 1 cup of a grated strong tasting white cheese, I used a white mature cheddar but parmesan is the best if your budget allows

Heat the oil and flour in a medium sized pan or pot. Allow it to fry for a few minutes while stirring the paste with a whisk. Remove it from the heat and add half the milk. Stir this with your whisk until the paste and milk have combined, then add the rest of the milk. Return this to the heat and stir it with your whisk slowly while waiting for the sauce to thicken. If it starts thickening very fast, remove it from the heat and continue stirring it until the thickening has settled down. It will reach a point where the thickness stabilises. Turn down the heat to low, add the mustard, cheese and salt and allow to combine.

To assemble a lasagna

In a deep ovenproof casserole dish with at least a 4 litre volume start your layering process. Start with a thin layer of meat sauce, then a layer of dry lasagne pasta sheet, then a layer of meat again, topped with some white, then lasagne, then meat, white and lasagne. The last layer should end with meat and a good layer of white sauce. Leave about a centimetre space in the casserole dish for the lasagne to expand.

Bake this in the oven at 180C˚ for half an hour or until a knife can easy pierce through the layers of pasta. You can now top this with grated cheese and grill it until it bubbles. 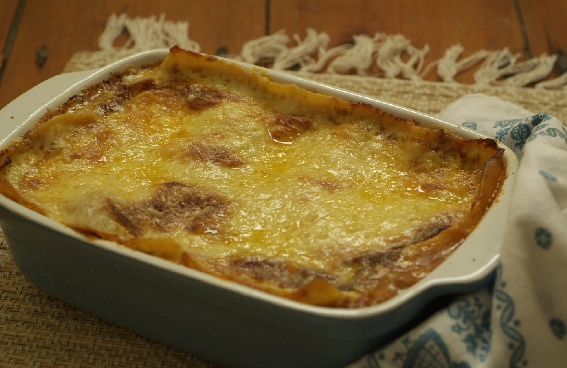