Adam’s Mom is out to visit from Australia and we thought it was a good idea to get our two sets of parents together in Betty’s Bay to celebrate the privilege of having both these wonderful women in our lives!

Adam and I had loosely planned Sunday’s events but I had not really decided on a menu for breakfast. I knew the house would be full of food and wanted to play it by ear according to what was there and what I thought we might all feel like at that point. So on Sunday morning we woke up bright and early put some coffee on and then I nosed around to see what was in the house food wise. Well, suffice it to say that we could survived a nuclear holocaust with the food reserves we had in the house, but we had spent allot of time eating over the weekend, so I wanted to keep the menu light and the portions small. I didn’t keep track of the recipes like I usually do but I will explain the process I followed verbally below.

For a description of the whole morning’s events (i.e. not just my recipes) read my step Dad’s very sweet blog about it on – http://blogsausbetties.wordpress.com/2011/05/08/mothers-day/ 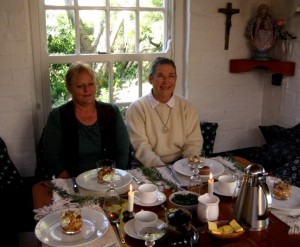 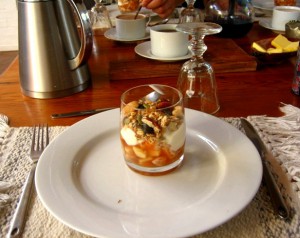 In the fruit basket we had bananas perfectly ripe, a big red apple and juicy tangerines. I peeled and chopped the fruit into small bits so that one would get a little of each fruit in every mouth full. I spooned this into the bottom of tumblers, spooned over some Greek yoghurt (which is so rich and creamy there is certainly no need to sweeten it), I sprinkled this with a spoon of muesli, some pumpkin seeds and some salted nuts. The salted nuts happened by accident as I hadn’t noticed they were salted but it added a lovely tanginess and didn’t taste salty at all. I then set these aside until everyone was ready, where I then poured a small amount of strawberry juice into each glass, just to cover the fruit at the bottom and to add a little sweetness. The result was fruity, creamy and crunchy without being too sweet and was a great way to start breakfast. 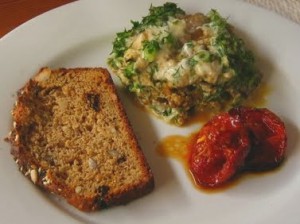 I wasn’t sure what I was doing with the eggy part of breakfast so I just put out all the ingredients which looked good and appropriate and took it from there. First I sliced tomatoes in half, sideways not lengthways, placed them on a baking tray and into the oven at 150C˚. Nothing added to them, just like that, while I left them slowly dehydrating for about an hour while I got on with the rest of the days preparations.

About 15 minutes before I needed them (but they had been in for an hour already) I drizzled them with a dash of olive oil, about a teaspoon of sugar and 1/8 of teaspoon of salt each, turned up the heat to about 220 C˚ and onto grill and let them caramelise a bit. The flavour was super intense, I thought they may have been a bit over powering for the more subtle flavours of the rest of the breakfast but the other diners did not agree.

The eggy part of the breakfast came together differently to what I had I first had in mind but I think the end result was pretty fabulous. I had started sautéing mushrooms the way I always do (see link) and in a heavy bottomed pot I was sweating off some shallots and garlic. My mom had bought some awesome farm eggs (some with double yolks) and I had put together in a bowl a mixture of sour cream, fresh chopped herbs (parsley, dill, rosemary, basil), spring onions, garlic, goats cheese, salt and pepper.

Once the mushrooms had reduced sufficiently I added them to the shallots, to this is added ¾ of the sour cream mixture, heated this until just before boiling point, then scraping holes into the mixture and cracking the eggs into the holes. I popped the lid on the pot and allowed the mixture to heat up a bit before dropping the heat to low, so the eggs could cook but preventing the mixture from burning at the bottom. I left this for about 10 minutes, checked the mixture with a spatula scraping around the eggs to see if the whites had set (this is when you would leave it longer if necessary).

Try not to take the lid off the pot much, if at all, so that the heat can build up and cook the eggs from the top as well. Once the whites where set but the yellows still runny I spooned over the remaining cream sauce and topped this all with loads of fresh chopped herbs and spring onions.

I placed the pot as is onto the table and dished it up from there. By the time the eggs where served the yellows had set a little but still had a little runniness in the centres (just how I like it). 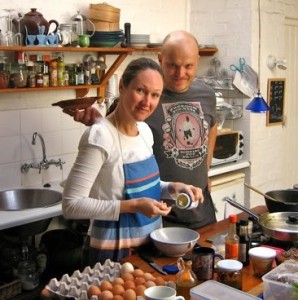 The whole day was such a joy. I’m not sure who enjoyed it most, the mom’s or us ‘kids’?